DISCOVER ISTANBUL Must Sees in Istanbul 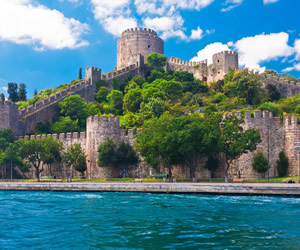 Sultan Mehmed II built the impressive fortress towering over the Bosphorus in less than five months in the year 1452 as part of his strategy to conquer Constantinople. It is positioned across from the Anatolian Castle on the Asian shore, another fortress built by the Ottomans some sixty years earlier. Upon completion the Ottoman forces were able to control sea traffic on the strait and cut off Constantinople from any aid coming from the Black Sea. Situated at the narrowest point of Bosphporus (660m), the castle’s original name was Boğazkesen, ‘The Straitcutter’, and it was only later renamed Rumeli (Roman) Castle. Its three main towers range from 22 to 28 meters in height, with walls as thick as seven meters.

Once a key location of the Ottoman conquest of the city, the fortress has been restored in the late 1950s and is now an open-air museum and concert venue.