DISCOVER ISTANBUL Must Dos in Istanbul

Shop at the Grand Bazaar or Spice Bazaar, or both! 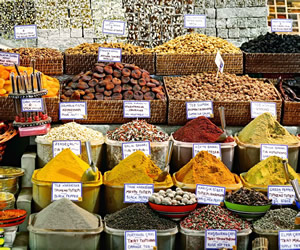 If you are a lover of markets, a lover of beautiful interiors, or if you’re in search of carpets, traditional Turkish wares, unique and hard to find spices — then the area of Eminönü is just your cup of tea. There’s no place quite like it, and even if you aren’t a shopper, a stroll around the Grand or Spice Bazaar is an experience in and of itself.

The Grand Bazaar with its 4,000 shops lined up along more than 60 streets and alleys is one of the largest (and oldest) covered bazaars worldwide. It is a fully functional city within the city, a commercial hub equipped with eateries and cafes, mosques, hamams, a police station and countless other facilities. The historical structure is arranged around the central area known as İç Bedesten or Cevahir Bedesten (inner bazaar), and extended bit by bit into the neighboring streets as roofing and other structures were added. Make sure to take your time when exploring the more remote alleys for unique products, and don’t miss out on the many hans (tradesmen workshops) where jewelry and other goods are being manufactured.

The Spice Bazaar built in 1660 is also known as Mısır Çarşısı or Egyptian Bazaar. The name derives from the fact that during Ottoman times most spices were imported from Egypt. The bazaar is part of the adjacent mosque complex, and the rent income it generated was used to support the mosque’s many charitable activities. Closeby, NAR lokanta is one of the rare options which offers a genuine and thoroughly researched menu representing the Turkish kitchen from the wide spectrum of its geographical regions, whether for a post-sightseeing lunch or for an appetizing dinner.

If you’re new to the city you’ll already have noticed the many restaurants lining the streets serving fish and small dishes (mezes). Nevizade near İstiklal Caddesi and Kumkapı in Fatih are such areas. There are meyhanes for every taste and budget, from the century-old tavern to the upscale modern restaurant, and many of them offer so-called fixed menus with unlimited rakı for a flat rate fee.